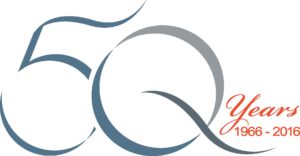 The firm started out of a one-garage house in Oakwood Village, Ohio. Now, 50 years later, it operates a more than 80,000-sq.-ft. facility in Twinsburg, manufactures product in China and Europe with a facility in Mexico forthcoming, and formed Q Holding Co., which oversees the QSR industrial business and its more recent Qure Medical operation.

QSR recently celebrated its 50th anniversary at its Twinsburg headquarters. The evolution from a small rubber shop to a large multinational has been eye opening.

“It’s crazy,” said Mark Grams, an employee in the firm’s mixing department who’s been with the company for 38 years. “I remember working in Oakwood Village. You’d work overtime, and there may be three guys in the plant. Now you might have 200 people here. lt was a little hole in the wall shop in Oakwood Village, and it grew. It’s been an evolution that’s for sure. Good times and bad times.”

And while QSR may not be as small as its initial roots, it has struck a nice balance of being big enough to invest in new capabilities regularly while maintaining a mom and pop shop focus.

“What Q tries to do is bridge in between those two,” President and CEO Randy Ross said. “The big companies are resource rich, and so they have a lot of technology. For our respective technologies and markets, we can match them. But we have the focus. We don’t try to do everything for everybody. We bring a lot of capability, resources and technology, and we focus them in a clear way.”

The firm has placed a premium on its employees since the very beginning. Sales/Engineering Coordinator Quinetta Welch, who has been with the firm for more than 40 years, said when the firm broke $1 million in sales for the year, the owners took all 80 employees and their families to Saw Mill Creek Resort in Sandusky, Ohio, for the weekend.

“QSR has always been a really strong company financially,” Welch said. “We’ve made it through four recessions without being too harmed. We had a few layoffs, but those people came back. They didn’t do a lot of loans.”

lt also has grown significantly, both organically and through acquisition, with the help of its former private equity owners. First Blue Point Capital L.L.C. bought silicone molder Limtech; then Industrial Growth Partners acquired QSR and merged it with another division under its umbrella Lexington Precision. Currently, the firm is owned by 3i, another private equity firm.

Q also operates its own tooling division, Quadra, which serves all of Q Holding’s operations.

“You don’t see a lot of rubber companies that build their own tools anymore,” said Dana Wooters, vice president of quality. “Not only do we build most of our own tools, we have two of the best tool shops you’ll find in the business. For building rubber tooling, these are two very highly capable rubber tool shops.”

The number of different molds/tools Q works with has increased significantly. Coy Goodman, an advanced technology engineer who worked with Lexington for 11 years prior to coming to Twinsburg, said back in the 1980s there were about 100 to 120 tools in a good year. Now the facility is able to handle more than 250.

“What we produced back in the ’80s was just 10 times better than anyone else,” said Butch Berg, a 39-year employee.

“A long time ago, people were wearing a lot more hats,” Goodman said. “So you were doing a lot more jobs. Now there are more people, but it’s probably how we’re able to take on so much more work because everyone is much more defined in what kind of job they do.”

But Q is not just resting on its laurels because it knows industry and regulatory demands are only getting harsher. Twinsburg Operations Manager Jim Maderitz said the days of good quality aren’t good enough now. Companies trying to thrive in the areas Q competes in-namely automotive, medical and aerospace-have to be the exceptional option.

Customers are asking more every day, through operational upgrades and technical capabilities.

“Making rubber parts and making sure there was good quality isn’t enough any more. You have to be the leader. You have to take the next step before your competitors get there,” Maderitz said.

“The overall team that we have is top notch. We have at our fingertips some of the most capable individuals in the rubber industry collaborating on an issue in minutes, and that’s always what’s made us strong. We’re very flexible; we can change direction when necessary. We have a lot of data driven systems that process that overall operational excellence that we’re trying to achieve.”