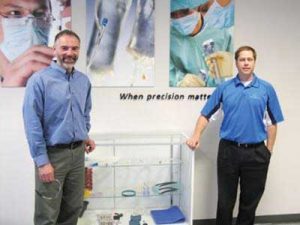 RPN PHOTO BY BRUCE MEYER
Bernie Stritzke (left), executive general manager of Qure Medical, and Nick Brust, vice president of sales, at the Qure facility in Sturtevant, Wis. The firm is adding a new clean room there to allow for production of high-volume silicone medical goods.

TWINSBURG, Ohio—Q Holding Co. has projects underway that will bolster its Qure Medical operations in Wisconsin and also bring online new plants in China for its automotive and medical businesses.

The projects include spending about $1.5 million to build and equip an 8,000-sq.-ft., Class 100,000 clean room within Qure Medical’s 90,000-sq.-ft. facility in Sturtevant, Wis., that will help the firm more aggressively pursue high-volume business. When that is completed early this year, the current clean room will be transformed into a Class 10,000 unit that will allow for the production of long-term implantable components and assembly of finished devices.

In China, the firm’s Quality Synthetic Rubber’s automotive business was growing so rapidly that it opened a second plant there across from its first factory, and early this year it will christen an adjacent facility to begin producing Qure Medical goods in the Asian nation for the first time.

“We’ve had good timing in the market,” said Randy Ross, Q Holding president and CEO. “The automotive/industrial markets are quite robust for us, and our medical message is resonating with us as a consolidator—somebody who can take care of all of your production needs.”

Q Holdings oversees QSR, Qure Medical and its Quadra Tooling and Automation unit. They comprise the businesses that were brought together in 2012 when the former Lexington Precision Corp.—backed by its private equity owner Industrial Growth Partners—bought Twinsburg-based QSR.

When Bernie Stritzke, Qure Medical executive general manager, joined the firm a year ago, he said the business concentrated more on low-volume orders, making products nobody else would. That thought process is changing.

“Our focus at this point is to get a lot of high-volume business in here,” Stritzke said. “We’re putting in automation and vision systems in place to be able to support this.”

The new clean room will have the capability to house as many as 16 150-ton presses, though Qure Medical will put in eight to 10 initially.

That doesn’t mean Qure will lose focus on the low-volume part of its base, because it still views that as a core business model. So the new clean room will be specifically for moderate- to very high-volume business with automated type processes.

Stritzke said making automated liquid silicone rubber parts isn’t just a matter of building a tool and setting it out in production.

“We geared up from an engineering standpoint, hiring engineers who are capable of doing that and understanding it so that we can be successful at it,” he said.

One of the complications of running LSR projects is that flash develops at a very low gap, the Qure official said. T o control that requires having tooling technology to keep the parting lines shut.

“You need to have a precision-built tool,” Stritzke said. “That’s why it’s nice to have the Quadra tool shop to build our own tools here. They understand what we deal with on a day-to-day basis. The tool people can see the tool run. They can see the fruits of their labor and understand what some of the challenges are.”

In addition, he said Qure Medical has an advantage over plastics firms trying to make LSR parts, because the finished product is an elastomer and needs to be flexible.

“They think of it as a plastic and build tools as a plastic,” Stritzke said. “They put them in so-called plastic presses and just run it, and they struggle with it because they’re not accustomed to it.”

The former Limtech business that was housed in Sturtevant before QSR purchased it in 2011 had many customers who were large medical device manufacturers, but the firm only had the low-volume business, according to Nick Brust, Qure Medical vice president of sales and once a Limtech staff member. “We didn’t have the capability for the high-volume business,” he said.

Qure services 20 of the top 25 medical device manufacturers and is starting to make headway in getting them to stop looking at the business as the “low-volume company.”

“We’ve quoted more high volumes in the last six months than we ever have,” Brust said. “We’re seeing a lot more opportunities because we now offer it. We have the team in place, the tooling in place, the technology in place and the clean room, so now we can be competitive quoting it.”

Qure Medical also can offer its customers options for individual projects. The Lexington deal brought together the Sturtevant plant and its expertise in LSR; the Twinsburg operation that concentrates more on high consistency silicone rubber, with some capability in LSR; and a former Lexington plant in Rock Hill, S.C., that processes polyisoprene rubber.

“We get everybody involved so we can give the customer options and the best quote possible for their component,” Brust said.

And being able to do more assembly work when the current clean room is converted to Class 10,000 will give the company the ability to offer more value-added services, he added. “It makes us an integrated one-stop shop. We can help you with most of your elastomeric components and assembly as well.”

The Twinsburg-based corporation hopes that the QSR model in China will work equally well for Qure Medical, according to Ross. For 40 years, QSR was known as a North American connector seal molder for the automotive and industrial sector.

“We went to China, and suddenly that opened the doors to 80 percent of the markets that we couldn’t access before,” Ross said. “With that model we now ship connectors to India, South Korea, Japan, Western and Eastern Europe, and China.”

The QSR Chinese operation now is molding and beginning to market insulator products that Lexington was known for. He expected QSR China revenues to total about $27 million to $28 million for 2013, and growth has been clocking in at about 40 percent a year. The company added about 26 pieces of large capital equipment to QSR China last year, including presses, vision equip-ment and secondary operations.

The second QSR China plant opened in October across from the original facility. The new unit will house

materials, shipping, receiving and mixing, with automotive molding staying at the first QSR building, said John Miller, Qure Medical technical support manager, who was in charge of setting up the new factories.

Those two facilities will total about 90,000 to 100,000 square feet combined, compared to the 60,000-sq.-ft. original QSR China factory. The Qure Medical site in China is adjacent to the second QSR plant and should be operational by the first quarter of this year.

Ross put the price tag at about $1.5 million to $1.8 million for Qure Medical’s Chinese project.

“We think it should take Qure Medical from being a North American medical device supplier to being a global one,” he said. “Medical device roots are very North American dominant. Most are headquartered in the U.S., but they’ve been putting production overseas.”

Customers have been very supportive since Qure Medical told them more than a year ago it was considering putting medical molding in China. Even after being able to tour just the automotive side, they were impressed enough, Ross said, to make future commitments to purchase goods. “We think there’s an obvious demand for the type of technology we’re going to offer there, just like we found with the automotive/industrial side,” he said, adding that the firm already has bolstered its sales engineering presence in China with two additional people.

The labor portion of the medical products operation isn’t significant, so most customers—anxious about long supply chains—want the production in China for logistical reasons, Ross added. And the company’s Chinese operations offer the same quality and technology as offered by sites in the U.S.

“When we set up a factory in China, be it auto or medical, we literally could take the operators out of Twinsburg, and they could run the China factory today and vice versa,” he said.